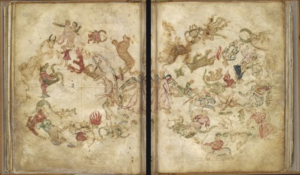 The Astrology Course is based on manuscripts produced in the 12th century. At that time works on astrology, mathematics, astronomy and philosophy were being translated from Arabic to Latin by various translators. John of Seville, a Jew who converted to Islam, was translating the works of Abu Mashar in Toledo for the local archbishop as early as 1135. Abraham Bar Hyya wrote astrology books in Hebrew before Ibn Ezra, and Ibn Ezra referred to himself as “Abraham the Copier” attesting to the fact that he is not inventing anything new in Astrology, but rather transmitting information he had found in other books . [1]The first version of the Astrological corpus was written in the town of Béziers in southern France. A colophon in one of the manuscripts gives the date of completion as Marheshvan 4909, which means November 1148 CE.[2] Shlomo Sela maintains that all the astrological texts were written one after the other in less than a year, and can be seen as one astrological corpus which was molded in the Greek and Arab Astrological genre.[3]

The Astrological corpus of Ibn Ezra includes the following: Re’shit Hokhmah (The beginning of Wisdom) – Introduction to astrology. Se’fer HaTe’amim (The book of Reasons) – an expansion to Reshit Hokhma. Mishpetei HaMazalot (The Sentences of the Signs) more on the signs. Se’fer HaMoladot – The book of Nativities, a practical guide to casting and reading a horoscope. Se’fer HaMe’orot – The book on the luminaries – a medical astrology book. Se’fer HaMivcharim – the book of elections – a guide to electional astrology. Se’fer HaShe’elot – the book of interrogations – a guide to horary astrology.  Se’fer HaOlam – the book of the world – a guide to mundane astrology. Added to these are two translations: Muhammad bin Almatani’s Explanations for the Astronomical Tables of Muhammad al-Khwarizmi and Mashallah’s book on the Eclipses. In a nutshell, Ibn Ezra’s astrological doctrine is identical to the one featured in Ptolemy’s Tetrabiblos with elaborations and additions gathered during the millennia between Ptolemy 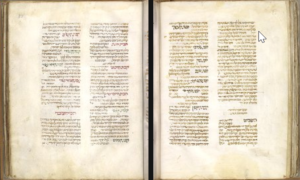 and Ibn Ezra.[4] Of those the most notable are what we call today “the Arabic lots”, and additions from the Hindu astrology. In this doctrine, any matter in life is determined by the strength of the planet that rules it. A planet gains in strength, or loses it, according to its location on the day and time and place one was born. The first chapter of Reshit Hokhma teaches the ‘wheel’, its parts, signs, shapes, and details the rulerships of the seven planets, Similar to the first book of the Tetrabiblos. The second chapter provides details about the signs, the third deals with aspects and houses, the fourth is about the planets and their significations. Chapters 5-8, are likely an exact copy of Abu Mashar’s book, Kitab al-Madhal, presents the rules for weighing the planets’ strength. [5] Chapter 9 is on the lots, and the last chapter introduces progressions. All the information in the book can be traced back to a previous authors of astrology.

The one book that stands out from the corpus is Sefer HaTeamim, (Book of Reasons), which is a commentary to Reshit Hokhma. Written in the same style Ibn Ezra used for his Biblical Exegesis: “brief notes commenting on the biblical text, interspersed with long digressions.”[6] The book features an extensive list of sources on which Ibn Ezra drew, and also two or three opinions in matters of controversy, with Ibn Ezra’s suggestion which is correct. The book starts with the explanation, that the ancients have divided the wheel to 360° because this number can be divided by all numbers 1-10, accept 7. [7] A matter of controversy, like the precession of the equinox is presented in the following way: The sages of India say that the fixed stars do not move, The ancients and Ptolemy said that they move 1° per 100 years, others found that it is 1° per 66 years, but the Ibn Ezra says that the correct figure is 70 years (In our modern time the precession is calculated to 72 years). Ibn Ezra admonishes his readers not to trust Ptolemy’s tables, and teaches how to verify and calculate the exact position of the stars by sight in Sefer HaOlam.[8] Another issue presented is the discussion on the direction of the winds of the sign Aries (important for weather forecasts): ‘The ancients claimed that Aries is a Southern sign, but Ptolemy disagrees and assigns the fire signs to the North, and Al Kindy says that the fire signs are Eastern with a Northern inclination – and that is correct!’[9] 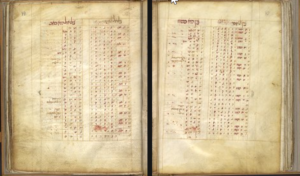 Sefer HaTeamim is rich with references to Ibn Ezra’s sources. Ibn Ezra cites Ptolemy almost every other page, Enoch is also mentioned many times with an approving tone by Ibn Ezra. (Enoch works are probably works from the 1-2 centuries claiming a reputable author), Dorotheus of Sidon, Valens, Abu Mashar, Ma’ashala, Yaakov Al Kindi, Abraham Bar Hiyya, Andruzagar ben Sadi Faruk the Jew, and Sefer Yesira. Also, Aristotle as in the discussion on the Sun “the sensitive soul is its portion – as is made known in Aristotle book on the Soul.”[10] Ibn Ezra often refers to collective groups of unknown writers such as The Sages of India, The Sages of Ishmael, The Ancients, The Babylonians, The Sages of Persia, and simply, The Sages of the Mazalot (signs). His list of sources attest to a phenomenal memory, and wide reading in the subject of Astrology.

The texts have been copied down the ages, translated to Latin and other languages, and are still relevant in the 21st century. The Astrology Course is based on these writings translated by Maayan to modern astrological terminology, and presents their content in the modern format of an E-learning course.

[3] Abraham Ibn Ezra, The Book of Reasons: A Parallel Hebrew-English Critical Edition of the Two Versions of the Text, edited, translated and annotated by Shlomo Sela, (Leiden: Brill, 2007) p. 15