In modern terms the following article deals with Ibn Ezra’s philosophy, which engroses the attention of those taking The Astrology Course. But before we start I would like to suggest the word philosophy as it is being used in the 20-21st centuries is vastly different from what a 12th century scholar would consider as his worldview.  The difference lies mostly in the modern tendency to separate, segregate and place sharp distinction between schools of thought. Today philosophy is one thing, theology is another, linguistics and mathematics don’t come together, astronomy belongs to another department, and astrology is a ‘hoax’ for the fools and the ignorant, while poetry is a literary niche. Yet, Abraham Ibn Ezra practiced all of them, taught all them, and in his and his contemporaries eyes all the intellectual pursuits were a way to add wisdom to the soul. Ibn Ezra held to the generic intellectual (Jewish or Arab) during his lifetime. He did not invent anything, nor delved too deep into any genuine philosophical deliberations. “His profuse writings were not characterized by any profound originality, they would subsequently play an important role in the spread of philosophy and other sciences (for example, mathematics, astronomy, astrology) throughout Europe”.[1]

The worldview of Ibn Ezra and his contemporaries was different to ours in many respects. Anyone

reading this article has been exposed at a very early age to the picture of the Earth as part of the solar system with the sun in the middle, planets orbiting in elliptical spheres around it, and all are within a galaxy named the Milky Way, which is now considered to be in the outreaches of the cosmos. A person born before the 18th century had a completely different outlook on Earth and the solar system, in fact, the term ‘solar system’ did not even exist.

Aristotle was among the more influential writers discussing the mechanics of the universe, the soul, what physical substance is made of, and why people are what they are (still, much debate on the last one). Ibn Ezra, as any other intellectual before the ‘scientific revolution’ accepted the Aristotelian view, the way we accept Einstein’s theories. The world is exactly as Ptolemy described it in his Almagest: the earth is in the middle of the universe, the 7 visible planets are orbiting it in perfect circles (retrograde motion is explained by a second circle orbiting the big circle). Above the Saturn circle is the circle of the zodiac and the fixed stars. Following this, monotheistic thinkers added above the world of the angels, and above all/encompassing all is the realm of God – all together 10 spheres. God’s will is transmitted by the planets. Indeed Ibn Ezra made up a term for the planets, translated to “servants” – serving god’s will. From the universal shape of the cosmos to the particular, the chemistry and physics of the earth were reduced to the four elements: Fire, water, earth and air. One can interpret every terrestrial phenomena by the constant changes of the elements from hot to cold, wet to dry. 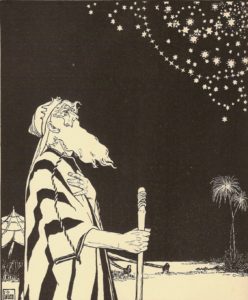 a philosophical notion which we moderns term ‘neo-platonic’. Ibn Ezra and his contemporaries firmly believed in the tripartite soul. The idea of the soul divided to three parts was introduced by Plato (In the Republic, the psyche is composed of three parts; the logical, the spirited, and the appetitive), but by Ibn Ezra’s time it explained a bit different.  In his long commentary to Exodus 23:25: ruah is the animal soul, nefesh is the vegetative soul, and neshama is the wise soul. The animal and vegetable soul perish with the body, the wise soul can then re-unite with God.  The wise soul is seen as entrapped in this ‘sub-lunar’ world of existence and its mission is to emancipate itself via studying and understanding the advanced sciences, of which astrology is the hardest to master. To love God is to educate oneself in god’s creation and gain in wisdom, combined with devotion. Ibn Ezra’s longing for a reunion with god is apparent in scores of poems describing the soul’s anguish at being trapped in a corporeal body and its wish for reunion with God.

Lord, my soul, athirst for Thee,

Liveth but Thy light to see,

Though consumed with longing, lives,

For new life that longing gives.

Made in God’s similitude,

And with heavenly powers endued.

In His steps she followeth,

Seeking Him with every breath,

All untouched by time, or place,

Without tool or instrument.

When the body’s frame decay’d

In the gloomy grave is laid,

And a bond of union makes

With the angels of the Lord,

One with them in sweet accord.

Endless is the good she sees,

More and more beyond all measure.”

Modern reading into his writing surprises one because he is such a rationalist most of the time, and yet there is a touch of what we may call ‘mysticism’ that enters in on various occasions. These days this view of the soul’s wish to unite with god is considered mystical (and so is the studying of astrology), but it was not so in Ibn Ezra’s eyes. He valued rationality and learning as the means to advance the wise soul, yet he did add that morals are important, in several occasions he mentions that God protects the devout (the Tsaddik)”.

The Collective and the Individual:

Horoscopic astrology deals with the individual. Yet, Jewish thinkers throughout time emphasized the

redemption of the collective of the nation of Israel. Ibn Ezra’s poems call for individual redemption, and at the same time lament the fate of the collective Jewish people suffering from persecution in exile. His career centered on teaching individuals, one by one or in small groups, how to ascend in the ladder of wisdom. His overall work reflects an interest in the individual’s fate and conduct. However, in one of the few true original passages he composed in his entire corpus (the opening to the book of nativities) he teaches that the collective carries more weight than any individual.  The eight rules by “Rabi Abraham the Spanish” postulate that an individual is subjected to the nation he was born to, geographic location and the opportunities it may offer, the times, the family situation, the king, and only then the nativity. The 8th rule places the soul and its wisdom as a factor in a man’s fate. A person who is wise and knows astrology may take precautions and alleviate a bad progression. However, “there is no doubt that the righteous is more protected than the scholar who knows the signs”. This emphasis on the individual on the one hand, with the understanding that the collective hold sway, still baffles many astrologers, and so is the debate on whether moral behavior changes a nativity.

Some notable absences: At that time the Ghyat al Hacim was making its debut in Europe under the name Picatrix. Ibn Ezra does NOT teach talisman making, conjuring of daemons and angles for help, or any of that sort. He only advocates the wise utilization of planetary motion in ones affairs.

Also it is remarkable that Ibn Ezra’s astrological books, besides the fact that they were written in Hebrew, there is no hint that can tell you they were written by a Jewish Rabbi. The notion that God is the creator and that his command is carried to the lower world by the stars is featured in many of the Arab astrologers’ writings such as Al-Kindi’s On the Prostration of the Outermost Sphere. [2] Jewish issues related to astrology are commented on in his exegesis, but are not mentioned in any of the astrology books, for example, he did not calculate when the Messiah is expected to come, something his contemporaries like Abraham Bar Hyya did.[3]  Many Jewish scholars through the ages believed that “there is no star to Israel”[4] and Ibn Ezra does refers to this is his long commentary to Exodus 33:21, where he expands the sentence to say that “there is no star for Israel, as long as they observe the Torah. In Sefer HaOlam, detailing the lordship of the signs and planets over nations, the Jews have Saturn as their lord and Aquarius as their sign, same as any other nation with their respective planets and signs.

Within Judaism he was overshadowed both by his friend Yehuda Halevi, and far more by Maimonides, who was also born in Spain, fled to Egypt and became one of the authoritative figures in Jewish thought. Not long after Ibn Ezra’s death, Maimonides banned Jewish people from asking the advice of an astrologer[5] (). Ibn Ezra is left as the only Jewish Rabbi who have commented on the bible from an astrological perspective, and the only one who have taught astrology as a legitimate science.

His poems reflect a soul in search for peace, and a man who has never felt at home anywhere in the world. He was not an original thinker, but his ability of synthesizing his predecessors and write concisely, eloquently and ironically is unparalleled. A great Sephardi cultural representative, his contribution to the Ashkenazi Judaism cannot be measured, nor can we trace how his works influenced some of the leading Christian thinkers yet to arise. But, we do know that he had influenced the rise of science in Western Europe, and he did it by teaching few individuals here and there, preparing textbooks for them, that are still relevant today.

[4] See the discussion in the Talmud, Shabat 156:  https://halakhah.com/shabbath/shabbath_156.html